How Do Fish Sleep?

Sleeping is one of the most precious gifts of nature. Ask people that struggle with sleep. They will tell you about the peace of mind they are missing.

In fact, sleeping is must for almost all the species living on this planet. Besides humans, animals also sleep and take their breaks properly. However, when we talk about fish, most people get confused and ask the question where do fish sleep?

Homo sapiens obviously require a comfortable place to sleep but what about fish? Do fish sleep with eyes open? These are some of the most frequently asked questions when we think deeply about these living things living inside the water all the time.

Do fish sleep with eyes open?

So, do fish go to sleep? If we assume that they do, then how do fish sleep? Have any of us ever seen a fish sleeping? If you look closely, fish will mostly swim around and will always be in search of some food.

Doing so, they will definitely need some rest and break in order to start again. That is exactly when the time of sleeping comes. You’d notice that they will hover in a place with their eyes wide open. Is that the case of a fish sleeping?

The very simple and straight answer is yes. They need to sleep and they can take that time off during the day or night. Also, it is now widely cleared that fish do sleep with their eyes open. At the same time, it also rules out the notion of fish sleeping while swimming.

The reason behind fish sleeping with eyes open is because they don’t have any eyelids to open. Some sharks have that feature, however; most of the fish around the globe don’t. Having an aquarium in your guest room allows you to take a close look at what these species are doing all the time. If you stop by and look closely, you’d see a goldfish hovering near the bottom of the tank.

Do fish go to sleep at night?

Well, the answer is very simple and discussed above as well. They don’t need a specific time to go to sleep. Humans can make use of the alarms that determine their sleeping hours. Fish do not have that facility. They go to sleep when they’re restless and looking for a break.

Sometimes, when you put food in the aquarium and one of the goldfish is hovering near the bottom, you’d notice that it takes them relatively longer to respond to the food you’re presenting. It is because they were taking rest in a corner when you invited them for lunch.

You must have noticed that humans too need a little feel of the morning before they jump onto the breakfast table. Coming out of your bed, you simply don’t desire to eat those breads and eggs straightaway. Similarly, the process of sleeping affects other species around us as well. They also need to swim around for a minute or two before they gain interest in the food you’ve thrown inside.

Do fish go to sleep?

In order to put it simply, we want you to understand that fish sleep is not exactly like human sleep. First of all, you won’t see any pillows around them. They do not use bed sheets and comfortable beds to sleep.

For fish, sleeping is more of a break that freshen them up to go about their work properly. Do fish go to sleep? It is the question asked so many times and people are still looking for various and wishful answers.

How do fish sleep in a tank?

As perhaps discussed earlier, fish will find their place anywhere. If you’re having them inside a tank, they will hover in a corner or go deep inside the tank to find a comfortable and less noisy place. Also, there are significant chances of fish sleeping and moving at the same time. This is not normal for humans and they assume that the fish is awake.

There are many fish around the globe with different breeds and they need to keep moving even when they’re asleep. It happens because they need to maintain a proper oxygen level in their bodies and the constant flow of water moving past their grills will make it easier.

Larger fish such as sharks need to keep doing this and we call it swimming at a slower pace. On the other hand, small fish will only move its fins occasionally to let us know that it doesn’t want to be disturbed.

There are many other interesting things related to certain types of fish. You’d also notice some types sleeping in ways that are completely similar to that of humans. For instance, fish that are located near a coral reef will have to stay active all day long and then get shelter in crevices in the reef at night to avoid being attacked.

There are other examples of Parrot-fish that uses a ‘sleeping bag’ of some sort. It is basically known for its amazing quality to secrete a ‘sleeping bag’ made of a jelly-like material made of mucus. When they feel like sleeping, they go straight to a place they feel protected in and surround themselves with a jelly to protect against predators as well.

Where do fish sleep? 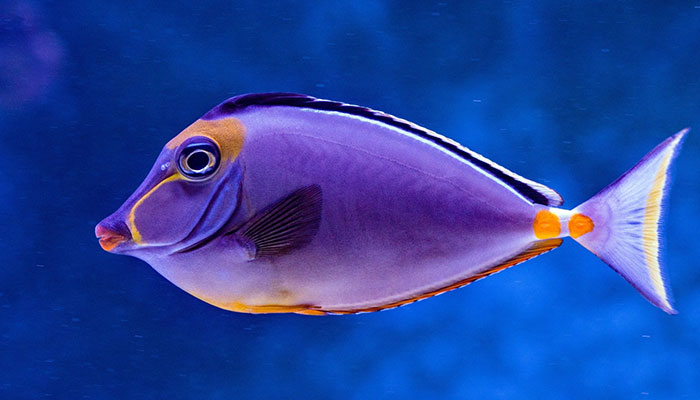 There is obviously no selected spot as far as the sleeping place of fish is concerned. People have been asking this question a lot of times and we are going to respond in the most logical manner possible. We shouldn’t confuse the sleeping hours of humans to other animals. Fish are basically busy animals as they spend a lot of time while swimming and searching for food.

Therefore, they get tired according to their daily workout. Sometimes they find food quickly and sometimes, they need to work hard for it. In case of food’s shortcoming, fish are busy everywhere and their movements steal more energy than they actually want to release.

When they feel like taking a nap, you’d see them going into a corner and looking for a quite place to get themselves refreshed.

So the whole idea of fish sleeping at night is not entirely correct. It only happens according to their condition. Some fish need to sleep for at least two or three hours whereas; others are required to take less sleep and be ready to function again.

The importance of sleep cannot be denied by anyone. All humans and animals need sleep. It is an extremely important exercise to refresh your mind and body. Also, there are different types of sleepers around us. Some wake up quickly with a little bit of noise coming into their room whereas; we’ve also witnessed people not waking up even when you’re trying your best to wake them up.

However, humans can be seen while sleeping and it is very easy to spot a person taking a nap. Do we have the technology or intellect to say the same for fish? Well, we believe that there are a couple of very simple signs that allow you to make a guess. First of all, sleeping fish will be motionless in most cases.

They often lie at the bottom or near the surface of the water. The response of the fish also slows down during their sleeping time and if you take a close look at the grills, you’d notice that there is a complete breathing process taking place.

People with aquariums at home will definitely understand and know that fish become very inactive when you turn off the light at night. Turning the light on in the middle of the night will give you an exact picture of their position without lights. There are some things that connect humans with fish.

These swimming species have internal clocks on them. They also get alarms like time to eat and sleep. Therefore, keeping the lights on the whole night won’t refrain them from taking their due sleep. Fish do sleep at night, however; they have their own ways and techniques of doing it. Besides motionless sleep, there are a few species of fish such as tuna and shark that move constantly to save their breath. It is very much possible that sharks and tuna sleep with half of their brain, just like dolphins.

In the end, we’re only going to say that a nice natural sleep is a fantastic gift. We as humans, take our necessity to sleep for granted. We don’t give it as much importance as it deserves. We only work efficiently and productively because we’ve slept well at night.

Therefore, it is also equally important for animals to get their sleep completely. Fish have its own styles of getting its nap and we’ve shed light on most of its tricks in this article. That’s all for today, we hope that you’d benefit a lot from this article and it will bring a positive change in your opinions.